by Communication and Visibility | Aug 31, 2018 | Livestock Production and Productivity Improvement 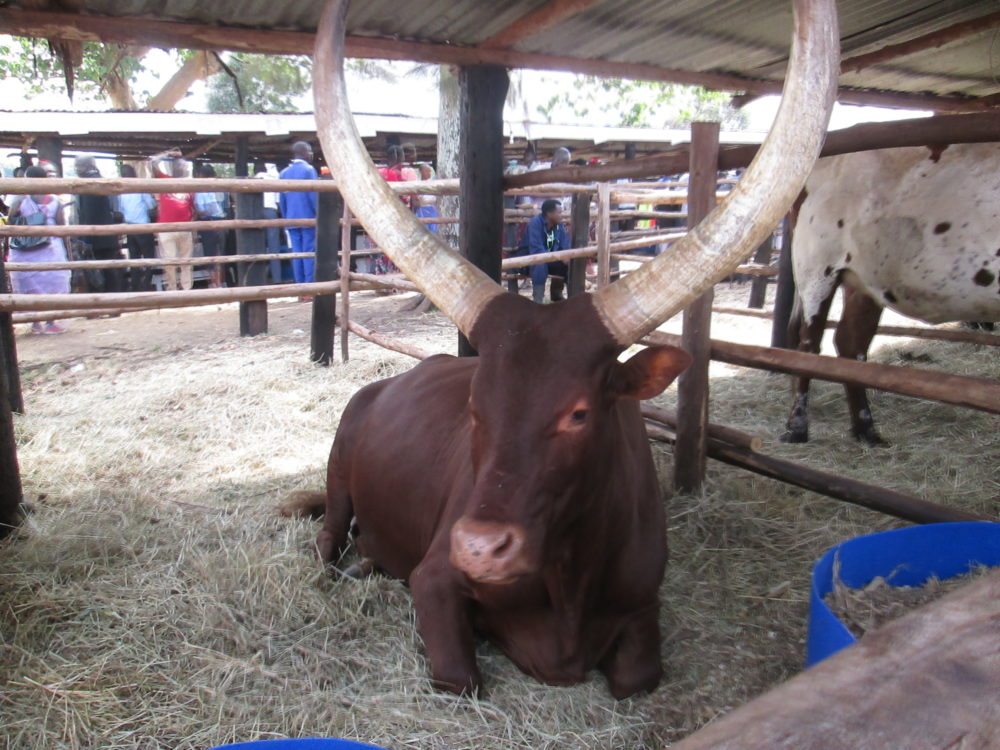 Foot and mouth disease (FMD) is an extremely contagious and infectious viral trans-boundary animal disease that affects cloven-hoofed animals especially ruminants and pigs. The disease causes immense losses in most cases with serious socio-economic/trade consequences and threats to the livelihoods of farmers. The spread is heightened by the local, global trade and movement. Foot and mouth disease despite the low mortality, it causes high impact due to the economic and trade-related losses that endemic states suffer.

Variations occur between viral strains that lead to the use of draconian control measures in infected areas including use of vaccinations upon confirmation of prevalent strain and later quarantine and restriction of movement of animals and animal products. There are 7 immunological varieties of the FMD virus: types O, A, C, SAT1, SAT2, SAT3, and ASIA 1. The disease is characterized by a number of clinical symptoms, in particular, fever followed by the appearance of blisters on mucous membranes in the mouth, the muzzle or snout and the skin and around and between the hooves, the effect being limping and excessive salivation. The virus spreads easily by means of direct contact (with live infected animals), and indirect contact (in the air, on the wind, on vehicles, people, and agricultural equipment, in animal products or animal feed, and via other species that are not susceptible, such as and birds).

FMD has been prevalent and endemic in most parts of Uganda and outbreaks can occur anywhere at any time of the year. All these serotypes except Asia 1 have been recorded in Uganda.  FMD outbreaks occur annually and do not seem to follow any particular spatial pattern but rather, occur sporadically at any location at any time of the year. The first outbreak of FMD was confirmed in 1953; since then, outbreaks became more frequent and have increased over time possibly due to the breakdown of veterinary services and decentralization policy. Numerous FMD outbreaks have been recorded in Uganda since January 2013; escalating in 2017/18. The pattern underscores any control intervention/measures being undertaken as each year, we would have speculated that the outbreaks in any particular year would be less than the preceding year. This is mainly due to the “fire brigade” approach of control rather than routine practice. These outbreaks have compromised food security, increased the cost of production, disrupted livestock trade and most recently caused cross-border security threats, especially along the Uganda-Tanzania border.

In 2012, the Parliament of Uganda debated a motion led by the Member of Parliament (MP) for Kanungu district, Dr. Chris Baryomunsi. He “rose” on the issue of national importance on the emergence of veterinary diseases in some parts of western Uganda and I quote “We have received reports that in communities which depend on cattle, especially the Ankole area, but also parts of Toro, there are three main veterinary diseases which are hitting hard the cattle and other animals in the area namely: Foot and Mouth disease, the lumpy skin disease, and tick-borne disease. Although the Foot and Mouth disease seems to be limited to a few sub-counties within Kiruhura District, the lumpy skin disease, which causes high morbidity and mortality among cattle, is finishing off the cattle in Ankole and is spreading down to Ntungamo and also to Kamwenge and Kyegegwa. The farmers and cattle keepers are complaining that there is little or no response from Government in terms of assisting them.  People who are keeping cattle are failing to control these diseases because the vaccines are extremely expensive. A dose, I am told, is about Shs 2,000 which is very high for an ordinary farmer in the area. Also, the farmers are not well mobilized to vaccinate their cattle. As you know, the economy and the livelihood of the people in that area depend on cattle keeping”.  He tasked the Minister responsible for agriculture and livestock management to explain why the disease was skyrocketing in these areas and what has been done and more urgently, the minister is aware of the outbreak of these diseases in western Uganda.

Relatedly, Mr. Theodore Ssekikubo (NRM, Lwemiyaga County, Sembabule): “rose” on the same matter and said, (not verbatim), “The outbreak of the Foot and Mouth disease has occurred and the only response so far has been imposing quarantine. Quarantine is meant to disallow the traveling and movement of animals but it isn’t a solution in itself because the herds are being affected. It is true that we have been using our own methods, but it is unfortunate that nowadays, apparently the disease is more resistant to our conventional treatment methods and I must inform this House that virtually, people in those districts and areas who had been encouraged to engage in modern farming in dairy production, have had all their herds down.

It should be noted that the situation has not improved but rather worsened and that the same districts are affected by water challenges that lead to farmers being forced to move animals. Socially, the people resident in the said areas are pastoralists who treasure movement with their animals; having animals is a way of life.

Scientifically, to effectively control Foot and Mouth Disease, there’s need to vaccinate up to 80% of the animals annually, for a period of five years.

In recent past, Hon. Vincent Bamulangaki Sempijja- Minister for Agriculture Animal Industry and Fisheries (MAAIF), issued a directive prohibiting cross-border movement of animals. This was further strengthened by the Minister of Defence Gen. Elly Tumwine’s directive on the movement of animals from affected districts, which has seen some veterinarians arrested.

However, as farmers, we are left with no promising options as we continue to count losses mainly because the livestock sector and the delivery of veterinary services in Uganda is broken down. There exists no compensation mechanism for the farmer. This is a major disincentive for farmers to report the disease for fear of being segregated or apprehended. However, provision of incentives to farmers needs to be paired with policies that encourage farmers to report any suspected cases, in addition, to buy stock from certified farms.

A deeper understanding of FMD and livestock trends is needed, such as sourcing of vaccines, vaccination, and scale of use of vaccines. This understanding will reveal the magnitude of the problem, information on the social and behavioral aspects of veterinary and para-veterinary practices that hinder the control of FMD and other cross-border diseases.

The inadequacies of the pre-market and post-market identification systems have further exacerbated the problem. Disease outbreaks follow many channels and depend on the inadequacies of many players in the livestock supply (movement) chain. There are many points with varying levels of compromise where animals can get infected and often there are no adequate systems to monitor animal movements. This action would require coordination with funding support for livestock identification and traceability systems.

In conclusion, investigating the role of a breakdown in veterinary service delivery that as a driver of increased cross-border disease outbreaks and how the inter-related factors foster an environment from which outbreaks remain unstopped. There is a need to make changes within the roles of different stakeholders to ensure adequate use of all available control measures to ensure sustainable livelihoods.