Is Formalin worth the media uproar? 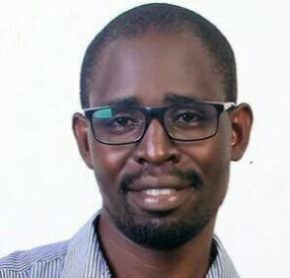 The media has been awash with reports of the use of formalin for the preservation of meat. Having worked in the meat sector for close to seven years, I can give commentary to the same with good authority.

Meat from the major sources especially cattle, sheep, goats, pigs, and poultry are usually marketed fresh through small-scale sellers or retailers. These retailers lack refrigeration (the cost of electricity withstanding). Furthermore, the animals that give us the delicacy are slaughtered from poorly designed facilities (better-called killing places) leading to heavy contamination of carcasses with bacteria ranging from E.coli, Enterobacter, Yersinia, Pseudomonas etc due to unhygienic handling.

Cognisant of the looming losses caused by dehydration (also called drip losses) and bacterial spoilage, the retailers have to assess the market or consumer requirements to minimize losses and therefore only buy enough carcass as can most likely be sold in a single day. The retailers usually have well-aerated rooms but with less effort to minimize flies.

The consumer, on the other hand, is not so well aware of their meat quality requirements as evidenced from various behavior such as the purchase of meat on roadside outlets close to residential proximity and frequent utilization of below 18 humans and Boda Bodas to buy the delicacy.

In rural areas, the retailer losses are more significant due to the reduced number of customers and fewer options for preservation. Bacterial spoilage results in foul odour, discoloration, gas formation, drip formation and sometimes production of hydrogen sulfide especially by  Yersinia, Enterobacter. 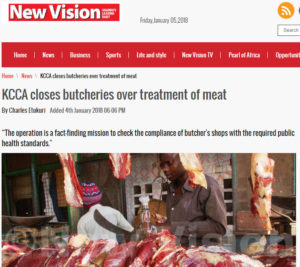 The major focus of this commentary is the reported illegal use of formaldehyde (including formalin) as a preservative for meat amongst Kampala butchers. Formaldehyde is a strong-smelling substance, highly irritable, that is unstable when exposed to water and air. When mixed with methy alcohol and water, formalin is formed. Formalin is frequently used to retard the decay process of live tissue. Formalin repels flies but with a highly irritable smell. To increase its stability, it is sometimes mixed with baking soda. Formalin, when applied to tissue, causes very rubbery consistency, stiff, whitish and slimy meat void of the meaty smell.

But who is to blame (if any) for this current state of affairs? To have appropriate answers, a few questions need to be posed. Who regulates the use and distribution of formalin? Are the consumers aware of the meat quality parameters? Is formalin the only meat safety and wholesomeness threat? What lies in the future?

Before the formation of the Dairy Development Authority (DDA), the dairy industry was dreaded by many. All is not well but much has changed for the better. The same should be done for the meat sector. The regulation of meat business is left to I guess Ministry of Agriculture, Animal Industry and Fisheries (MAAIF), that continually boasts of providing a conducive environment for business. Some districts don’t have meat inspection stamps.

I propose the mandate of DDA be expanded to allow regulation of meat business. There is corridor gossip of increasing the mandate of the NDA to be called the Food and Drug Authority. The Bible warns that if you can’t be trusted with less, why be trusted with much? NDA has the responsibility of controlling the presence of formalin on market. 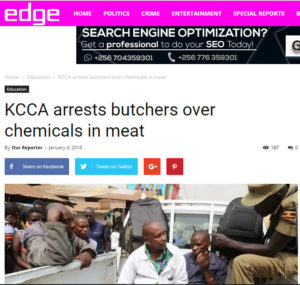 Lastly, I believe the consumers have the most important role to play including demand for quality products. KCCA should prove to the public that it can perform beyond removing street vendors.

Let each of us play our roles