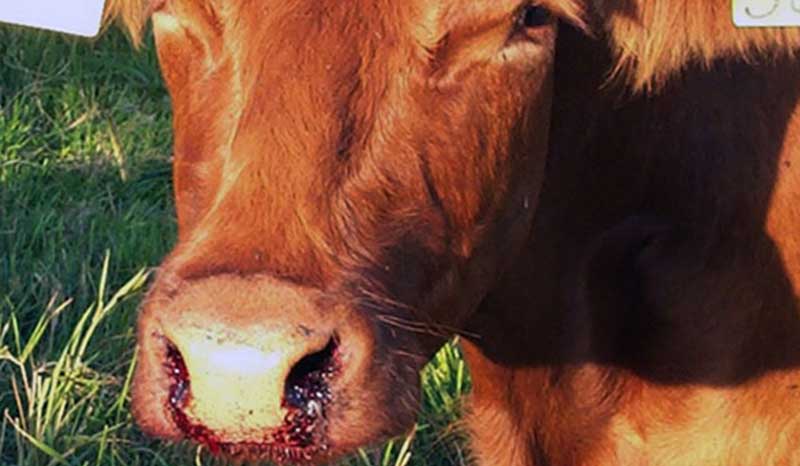 Zoonotic diseases are diseases that are transferred between animals and people. and from people to animals. They may be acquired or spread in a variety of ways: through the air (aerosol), by direct contact, by contact with an inanimate object that harbors the disease (fomite transmission), by oral ingestion, and by insect transmission.

Anthrax is a Zoonotic disease. It is a bacterial disease caused by Bacillus anthracis, which forms spores that survive for years in the environment.

Cattle, sheep, and goats are at the highest risk of developing anthrax, but other farm animals, as well as wildlife and humans, can contract the disease.

The most common form of infection method is by oral ingestion of soil contaminated with anthrax spores.

The most common clinical sign in animals is sudden death. Blood may be seen oozing from the mouth, nose, and anus of animals that died of anthrax.

People develop anthrax when the organism enters a wound in the skin, is inhaled in contaminated dust, or is eaten in undercooked meat from infected animals.
Biting flies can transmit the bacterium, which results in redness and swelling at the bite site.

For human beings, the skin form presents with a small blister with surrounding swelling that often turns into a painless ulcer with a black center. Without treatment, the risk of death from skin anthrax is 24%. For intestinal infection, the risk of death is 25 to 75%, while respiratory anthrax has a mortality of 50 to 80%, even with treatment.

A vaccine for livestock is available in areas where anthrax is a common livestock disease.

Always contact a Veterinary Officer if you suspect Anthrax