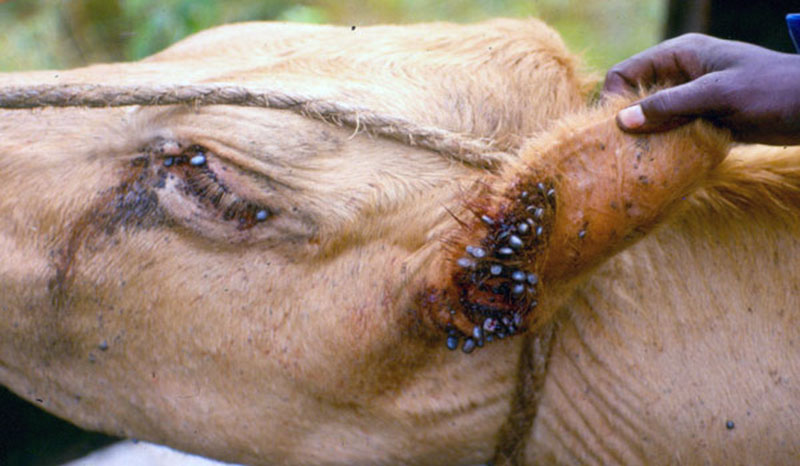 A host of livestock farmers in Ssembabule District have resorted to using bat fumigant to kill ticks which have continued to resist several types of acaricides.
According to Moses Ninsiima, the chairperson Ssembabule Cattle Keepers Association, although bat fumigant does not completely kill the drug –resistant blue and red ticks, those who have used it so far claim that their animals are getting some relief.
“It is a mixed reaction because a section of farmers claim the bat poison has been fruitful while others say they have been forced to spend more because the poison affected skins of their herds,” Ninsiima says.

Ineffective acaricides
Richard Turyasingura, one of the cattle keepers in Ntuusi sub county who lost 31 cows to ticks faults government for failing to fulfill its promise of giving effective acaricides to farmers as well as vaccinating the cattle.
“The disease is wiping away the animals. Extension workers too cannot help,” Turyasingura.
Since June last year, farmers have been battling acaricides resistance ticks which have caused east coast fever, claiming droves of animals.

Empty promise
In a move to tackle the problem which has currently spread to 27 cattle corridor districts, government through the Ministry of Agriculture, Animal Industry and Fisheries promised to vaccinate all cattle against east coast fever as well as getting farmers better acaricides.
The resolution followed reports from laboratory tests in Kampala, where samples of ticks were taken and proved that ticks had provided resistance to drugs, as Joy Kabatsi, the state minister Animal Husbandry revealed then.
She said they had observed a complex of reasons that accounted for ticks resistant.
Among these, she noted wrong dosage and poor mixing of acaricides. Cases of fake acaricides on the market, like farmers noted, was also observed.
On top of vaccination and spraying, Kabatsi said the farmers were also going to be sensitised on proper use of drugs, although the farmers insisted that they know how to mix drugs and have been doing it for such a long time.
To this effect, Shs10 billion was earmarked to carry out vaccination, however government has not yet fulfilled its pledge.
The pledge came after a team of experts carried out laboratory findings which revealed that ticks had developed resistance.

Lost hope
However, after waiting for the anticipated vaccination which has been postponed four times (December 2016, January, April and July respectively), farmers have since lost hope and desperately resorted to use bat poison.
In July this year, President Museveni launched a new drug (Vectoclor Acaricide), at the Kiruhura District headquarters which acted as a sample district in testing the effectiveness of the drug.
The district then started the programme to test the effectiveness of the drug with the whole campaign being spearheaded by both the district and ministry officials.
Reports from the 18 lower local councils selected 82 parishes of Kiruhura District on trial indicated that the drug was effective.
Kabatsi in an interview recently confirmed it is from this trial exercise that government will roll out the spraying of cattle throughout the country to eliminate ticks and that the ministry had ordered for a consignment of acaricides.
“We are expecting the consignment any time and the moment the drug arrives in the country, we shall start distributing it to the farmers to spray their cattle,” Kabatsi said.

Ticks prevention
Avoiding contact with ticks is the first line of defense against tick-borne infections. Here are some tips to help keep you and your family safe from these tiny threats.

• Ticks are carried by, mice, and other common creatures. Keep these uninvited guests away by installing a fence and moving brush piles and wood piles (where mice find shelter) and bird feeders (a source of food for rodents) away from your herd.

• There are a number of plants you can cultivate around your yard that repel ticks, including lavender, garlic, pennyroyal, pyrethrum (a type of chrysanthemum), sage, and eucalyptus.

• If your lifestyle permits, raising chickens and ducks will help keep the tick population down as these feathered friends have a voracious appetite for them.

About the disease
East Coast fever is a tick-borne protozoa infection of cattle in East and Central Africa. The disease is transmitted by infected ticks “Rhipicephalus appendiculatus” usually termed as brown ticks since they often attack the ears of cattle and sheep.
According to Edward Muwanga, a veterinary doctor, the disease constrains cattle from developing and later leads to death.