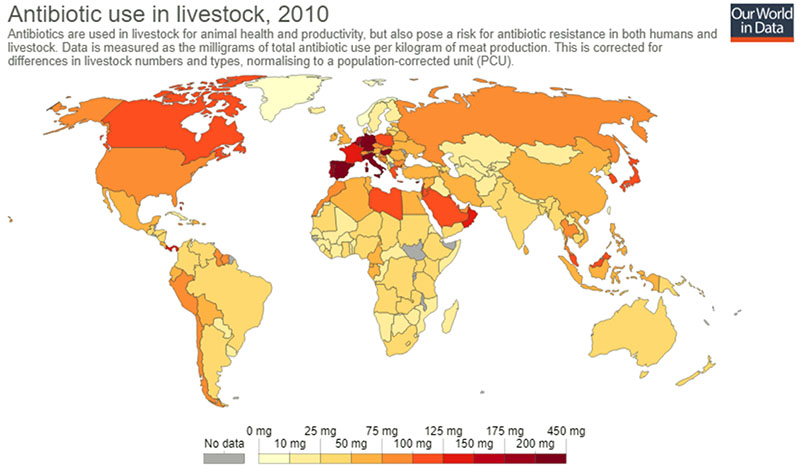 Antimicrobial resistance (AMR) — that is, a declining effectiveness of medicines to treat bacterial infections — is identified by the World Health Organization (WHO) as one of the greatest threats to global health, development and food security.1AMR occurs when bacterial populations evolve in the presence of an antibiotic medicine; this leads to treatments becoming either less efficient or completely ineffective.

A number of infections, including pneumonia, tuberculosis, and salmonellosis are already showing increasing resistance to antibiotic treatment, making them more difficult to treat.2

Although AMR arises naturally as bacteria encounter antibiotics, the overconsumption of these medicines is accelerating the process. In addition to the overuse of antibiotics in human medicine, their use for livestock farming is also linked to resistance in humans.3 Antibiotics used in agriculture can be ingested by humans through food consumption.4Furthermore, it’s estimated that up to 90 percent of antibiotics consumed by animals are excreted — releasing them into the natural environment for dispersal in ground and surface waters.5 In 2016, the UN General Assembly recognised the use of anitbiotics in the livestock sector as one of the primary causes of antimicrobial resistance.6

This post takes a look at the data on the global use of antibiotics in livestock, and what can be done to limit its impacts on global health and antimicrobial resistance.

Global use of antibiotics for livestock

But why do we use antibiotics in agriculture? Like humans, animals are susceptible to bacterial infection — antibiotics are therefore used to treat infected animals. However, their application now extends beyond this. For farmers, often with large populations of animals (which increases the likelihood of bacteria spreading if one animal is infected), it is a priority to make sure that their livestock are in optimum health. The mass use of antibiotics as a preventative measure (rather than as a treatment) has therefore become increasingly common. In addition to their use for infection treatment or prevention, antibiotics are, in some countries (although banned in others, such as the EU) added to animal feed in order to enhance animal productivity and meat yields. This revelation that the supplementation of animal feed with antibiotics led to increased growth was a largely spontaneous discovery in the 1950s.9

Antibiotics use is commonplace across the world. In the chart below we see the consumption of antibiotics in livestock in 2010 (latest available data at national levels) across a range of countries.10 Since levels of meat production vary significantly across the world, these metrics are reported in milligrams of total antibiotic ingredient used per kilogram of meat production. This is corrected for different livestock species and sizes, giving a population-corrected unit (PCU). This allows us to compare rates of antibiotic use across the world.

As shown, there are large variations between countries, ranging from only 4 milligrams per kilogram in Norway, to greater than 200 milligrams in Cyprus, Spain, Italy and Germany in 2010.

Regulatory successes: how to reduce antibiotic use

It’s expected that as global meat consumption continues to rise, and low-to-middle income nations shift towards more intensive livestock methods, total antibiotic use in livestock will increase from 131,000 tonnes in 2013 to just over 200,000 tonnes in 2030.11 This increase poses a significant threat to the effectiveness of antibiotic medicines. The UN have issued extensive guidelines on their use in livestock and published a ‘strong recommendation’ for overall reduction in the use of medically-important antibiotics in livestock.12

Rates in Scandanavian countries — Norway, Finland, Sweden and Denmark — are 50-100 times lower than in other European countries such as Cyprus, Spain and Italy. In the 1990s and early 2000s, the Scandanavian nations phased out the use of antibiotics for growth promotion (called ‘antibiotic growth promoters; AGPs’).13 This led to a significant decline not only in antibiotic use for growth, but also for therapeutic uses. These countries maintain very low levels of antibiotic use partly through a combination of good practices for livestock health (reducing the demand for treatment) and regulatory restrictions.

In 2006, the European Union (EU) banned the use of antibiotics for non-medicinal purposes. This has had varying success in reducing consumption across the EU and while in some countries we do not see a decrease there are other EU countries in which we have seen a significant decline after this ban: Germany, France and the United Kingdom have all seen declines in antibiotic use through tightening monitoring and reporting requirements. The UK set a target of reducing consumption below 50mg/kg of meat by 2018; it reached this target two years ahead of schedule.14